The History of Surfing!

How it all began - The History of Surfing 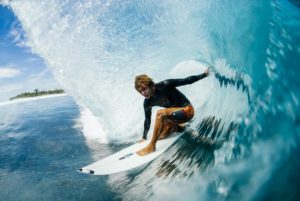 Surfing is one of the most popular coastal sports and pastimes in the world. Come Hell, dangerous rip tides or threat of shark attacks, nothing can keep a surfer from running into the water to catch a wave. Like many sports, surfing has a rich history surrounding it.  In fact, it wasn't event called "surfing" when it started.  The original term was surgo, a Latin word meaning to rise or stand up.  After all, surfers have to climb onto the board and then stand up in order to ride the waves.  Something else to consider here is that the waves and the tide also rise.  The origin of this word dates back over 2000 years.   Talk about the splash of ages!

Surfing references were first discovered in Polynesia. Cave paintings from the 12th Century showed people riding on waves on what appeared to be some type of board. In the course of seafarings, Polynesians brought surfing to Hawaii and the sport exploded in popularity. Surfing in Hawaii wasn't just a fun activity but also an important part of the religion. The process of choosing a tree from which to carve your board was vital and religious rituals were practiced during the surf board shaping. The ceremonies served as protection and to secure the gods' goodwill. Everybody surfed back then regardless of age, sex, or social position.  However, there  was a strict rule system in place that regulated who could surf on which spot. In other words, the most popular of the tribe got the pick of the beach.  According to legends passed down from many generations of Hawaiians, the chief of a tribe was chosen not by birth but by who was the best surfer.  This has not been confirmed as fact or fiction. 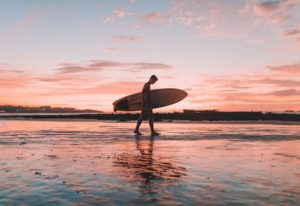 The first written heritage about the history of surfing was found in the diary of a man named James Cook who was a European captain who discovered new lands and the amazing  surfers on the island of Hawaii. The colonization of Hawaii began shortly after that when Christian missionaries began traveling there. The approach of life had been remarkable before the strangers arrived. Sadly, the settlers changed everything.  The Hawaiians were now forced to wear the clothing of the settlers, made to attend church frequently, and to send their children to the new school.  During this time, surfing lost its once strong influence but never vanished completely.

Eventually, surfing began spreading and gaining popularity around the world. One place that is now always associated with surfing is the great state of California.  Southern California developed a special culture around the surfing lifestyle that attracted many people wanting to enjoy life more fully. This culture really took off in the 1960s when surf themed movies and music became an international phenomenon.  Although that time has passed, the lure of surfing is still present and thriving. I imagine it will be for another 2000 years or more. 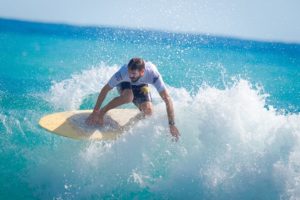 If you would like to learn more about surfing and its history, click on the links below!