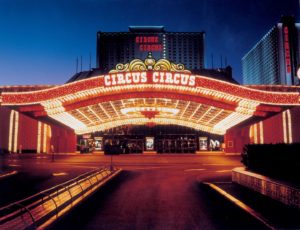 We are always looking to partner with new businesses and this time we hit the "big top" with Circus Circus Hotel and Resort in Las Vegas Nevada. Don't be fooled by the design appearance or name. Designed by Rissman and Rissman Associates and opened in 1968, Circus Circus may look like a great place for families to clown around but it was intended for adults. After all, in 1968 Las Vegas was obsessed with making sure that everything in the city was theme oriented. From the exotic pyramids of Egypt to the marvelous Caesar's Palace of Rome, taking a trip to Vegas was like stepping into a different time period.

However, times did change and an increase in demand for family friendly entertainment led Circus Circus to become one of the first casino properties to make attracting families its primary objective.  In 1993, Adventuredome, an indoor amusement park,   opened and has expanded since then with dozens of rides and roller coasters.  During Halloween season, its Fright Dome is one of Vegas’s most popular haunted houses. Other attractions include free clown shows, an arcade, a virtual reality room, an FX 4D theater, Angry Birds The Ride, and so much more.  It really is a fabulous wonderland for families to enjoy and make memories that will last a life time.  Also, special mention here for the super cool experience of Neon Nights where you can get your glow on after dark every Friday and Saturday night. Imagine  5 acres of glowing indoor fun as the Adventuredome takes on a whole new vibe with neon inspired rides, attractions and Midway Games. 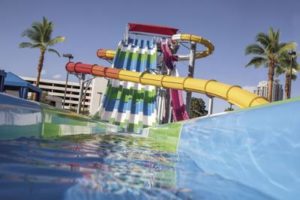 Amusement Parks are awesome but we favor a more aquatic attraction known as the Splash Zone! Over an acre of fun at Circus Circus Las Vegas Splash Zone. Swimming pools, whirlpools, water playground and a 50 ft slide tower!  Circus Circus' newly expanded pool experience features a 50' waterslide tower with three exciting slides, Splash Pad - an all ages water playground with waterfalls and splash buckets, plus Splash Snacks food truck and Cabanas for rent. The Splash Zone features three slides including a 50 foot slide tower. Need something a little less exciting? Splash and play all day with water cannons, spill buckets, rain trees and more at the Splash Pad.  However, be prepared to get totally drenched before the day is over.  If taking a swim or just cooling off in the water is your goal, they've got you covered. There are two large and refreshing pools and whirlpools to enjoy. Access to Splash Zone Slide and Pool Complex is exclusive to Circus Circus - Las Vegas’ current registered hotel guests

Circus Circus has made memorable cameo appearances in films like James Bond: Diamonds Are Forever, Austin Powers: International Man of Mystery and Honey, I Blew Up the Kid several decades later. But its most famous appearance is perhaps Hunter S Thompson’s Fear and Loathing in Las Vegas, where it sends Thompson and his attorney into a tailspin “nobody can handle the possibility that any freak with $1.98 can walk into the Circus-Circus and suddenly appear in the sky over downtown Las Vegas while boldly announcing any thoughts he has."  Talk about fun pop culture trivia questions for game night!

Circus Circus is definitely the place to be for a unique vacation experience to dull all others.  We are proud to have partnered with this amazing establishment and look forward to having our lifeguards watching over everyone. Visit circuscircus.com learn more and book your next vacation. Also, take a look at the interesting time chart below to see high points of the hotel's history. 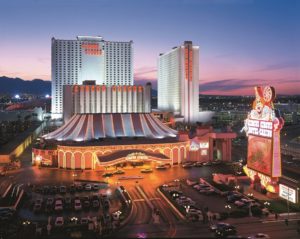 1968 - Founded
1969 - Circus opened their new 750 seat Hippodrome showroom with the Nudes in the Night.
1970 - Sarno rejoined the organization in January of 1970, after having arranged to rectify some of the resort's pressing financial matters with a personal load of 200,000.
1972 -  Circus originally a casino, became a full-fledged hotel resort with a 15-story room tower housing 400 rooms.
1973 -  the buffet replaced the Hippodrome and Gilded Cage.
1974 -  Sarno leased the property and sold the structures to William Bennett and William N. Pennington.
1975 -  a 15 story, 395 room twin tower was completed which brought the number of rooms to 795.
1978 -  Circus built a five-story parking garage with 1,000 spaces to accommodate its growing visitors.
1979 -  Circus opened a 421 space recreational vehicle park on the rear of its property.
1981 -  Circus implemented the Circus Sky Shuttle which linked major areas of the resort.
1982 -  completion of the 7 million expansion and renovation included enlarging the casino, dining and valet parking facilities, interior decoration and a new front entrance marquee.
1985 - a second 1,000-car high-rise parking garage was built.
1997 -  Circus opened its 8,000 square-feet of banquet and meeting facilities in the Skyrise Tower and completed renovation of the Casino Tower.
2000 - In April of 2000, the magic of special effects filmmaking, combined with modern motion simulator technology is taking a popular theme park attraction to a whole new level of excitement.
2017 - Details of the Ruffin deal come less than two weeks after MGM Resorts and lawyers representing victims and families in the Las Vegas shooting rampage that killed 58 people and wounded hundreds in 2017 reached a settlement deal that could total 800 million.
2020 - A sign outside the Slots A Fun casino, part of Circus Circus in Las Vegas, NV, January 2020.
This article is brought to you by: The Swimming Swan
Back to Blog