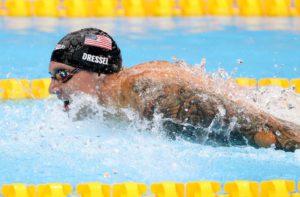 USA dominated the sports of swimming and track and field, in which U.S. athletes won 11 and seven gold medals, respectively. Star athlete Caeleb Dressel led the way among individual American gold medal winners with five gold medals in total in the swimming events.

Born August 16, 1996 and from Green Cove Springs, Florida,  Caeleb Remel Dressel is an American swimmer who specializes in the freestyle and butterfly sprint events. Dressel currently represents the Cali Condors which is part of the International Swimming League.

Swimming with the strokes of a champion, Dressel set an Olympic record in the semifinals in Tokyo and shaved 0.03 more off that time to set the new world record in the final. It’s the first world record for an American swimmer in Tokyo, and only the second individual world record set at this Olympics. Not too shabby!

Dressel now owns the five fastest times in the event. That’s no small feat given that the record he broke in 2019 belonged to Phelps, who was the first to break the 50-second barrier at the world championships in 2009, which Phelps swam in a type of fast suit that is no longer allowed in competition. Dressel’s time placed him in the company of other great American champions in the event, from Phelps to Ian Crocker, Pablo Morales and Mark Spitz, each of whom contributed to faster and faster races that set the stage for Dressel’s impressive time. 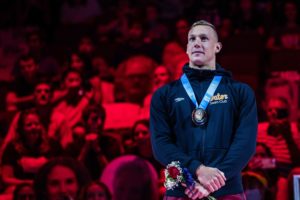 The 24 year old athlete may have made it look easy but says it was definitely not. After all, he participated in a total of 12 swims. That much activity can burn out even the best swimmers. “I can be proud of every swim, every effort I put in the water, every mental approach to every single race,” Dressel says. “I was nervous before races. Every race was not perfect. … Every morning when I woke up the first words weren’t always, ‘Oh, I’m so excited.’ Sometimes it was, ‘Oh f***, this is going to suck today.’ Sorry, just trying to be honest with you guys. In spite of a smidge of imperfection, Dressel went on to say “But just because it’s bad doesn’t mean it’s not worth it.”

Results don't lie and Dressel's final results were truly phenomenal with five gold medals, two world records, two more Olympic records, and a seat next to Michael Phelps and Mark Spitz as just the third American male swimmer to win three individual golds in a single Summer Games. As Dressel is now literally the world's greatest swimmer, it can definitely be said that whatever he is doing is working and he should just keep doing it.

The only thing lacking from making Dressel's Tokyo Olympic experience absolutely perfect was s a sixth gold medal. Sadly, his bid to win a sixth gold medal fell apart with another U.S. relay debacle. Apparently, Team USA was just too far behind in the 4x100-meter mixed medley when their top swimmer took over. In the end, the best Dressel could do was rally the U.S. to a fifth-place finish in an event that features two men and two women on each team. “Fifth place is unacceptable for USA Swimming,” Dressel said. “It stings.”

In spite of that loss, nothing can take away his impressive victories or world records.  It will be amazing to see what happens in the 2024 olympics in Paris. 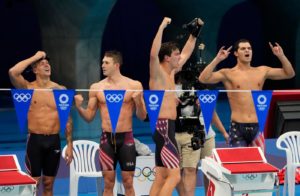