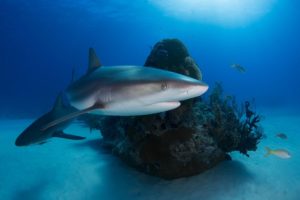 SharkWeek this year brought us some incredible adventures, awesome celebrity hosts, and all the sharks we could handle.  It also brought us programming to remind us of just how deadly an encounter with one of these magnificent animals can be under the wrong circumstances. Spending time in the ocean, particularly the waters off southern California's coast, is a great way to relax, exercise, and have fun with family and friends.  However, it is important to remember that the ocean is not a giant swimming pool and that every time we enter the water we are guests in someone else's home.  Knowing what types of sharks are residents in the beautiful waters on San Diego's coast can help us be more aware of who we are sharing space with when we go into the ocean.  Although shark attacks here are exceedingly rare, several species of sharks are very common in our waters. 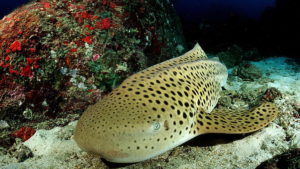 Between five and 10 species of shark live within about a mile of shore in the San Diego area. These include the leopard shark, smoothhound shark, sevengil shark, swell shark, soupfin shark, and the infamous great white shark.  The leopard shark is the most near to shore and they are completely harmless unless provoked. Every year, thousands of leopard sharks head to the shores off the coast of La Jolla Shores to mate and then hatch their young. The warmer waters here provide an ideal temperature to incubate, and the sharks will typically stay for up to six months to complete the process. Snorkeling alongside them at La Jolla makes for an incredible afternoon out with the family. End of August and September are usually the best times to see La Jolla Leopard Sharks because  this is towards the end of the mating season and there are higher numbers of sharks. The ideal time to go is during the day, when there are calm waters and it’s sunny making them easier to spot! 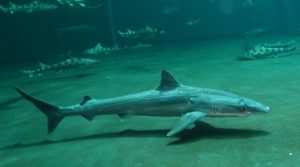 The Soupfin shark has a very odd name so we will take a look at it next. This shark can be identified by a few notable characteristics. Its body, like the Leopard Shark, is long and somewhat slender. But, its snout, unlike the Leopard Shark and even the Sevengill, is very pointed. However, with it's overall grey coloration,  fade-transition to a white underbelly, a triangular dorsal fin and a second dorsal fin directly superior and proximal to its tail, it can appear to be a scaled down Mako or Great White shark to the untrained eye. Soupfin Sharks wander into shallower waters during the late spring to early summer for reproduction. After spawning, they’ll head out to slightly deeper waters. Sadly, their population is still in the process of bouncing back after being over fished for so many years. 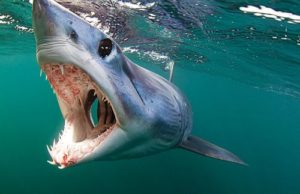 Other species live in the ocean beyond a mile, including makos, blue sharks and thresher sharks.  Aggressive and scary looking, the Mako Shark is the fastest shark in the world. It can clock in at speeds of 60 mph and has an extremely streamlined body that is shaped like a torpedo that helps minimize drag as it cruises through the water. They are outstanding food and game fish, prized for their fighting qualities and repeated leaps out of the water. They are considered dangerous to humans because of the speed which it can attack and its ability to jump into the fishing boats. Luckily, the Mako prefers to stay in deeper waters away from swimmers and snorkelers. 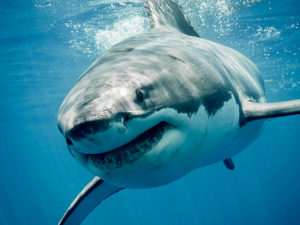 The last shark we will take a look at needs no introduction.  The Great White Shark has been an image of nightmares since the release of the movie JAWS.  Large, powerful, and responsible for more attacks on humans than any other shark species, this shark carries a big bad reputation.  However, the truth is that JAWS here is not an ocean bully.  He is simply doing what sharks have done for millions of years - survive! Most people expressly fear the great white shark and consider it a man-eater predator. Definitively, it is a powerful, aggressive and efficient predator, but it has no preference for humans. The attacks usually happen because of the shark confusing a person with prey like seals and sea lions.  As a consequence, they give a “test bite,” but it is unlikely that it keeps eating once it finds that it is not its usual food.

Sharks don't swim in the ocean for fun or sport.  They are there because it is their home and natural habitat. Sharks are not out to get humans but do unfortunately test us out to see if we taste good like their usual meals. Remember to always be respectful of their home and educate yourself about ways to avoid a bad encounter when sharing the water with them.

If you missed any of the amazing programs from SharkWeek you can still view them on the Discovery Plus app. Also, Shark Fest is in full swing on the National Geographic channel.